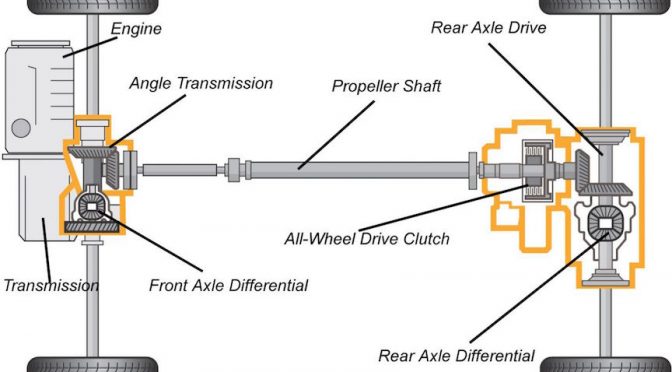 The above three letter acronyms will mean something to a few, but confuse others.  We’re here to explain the pros and cons of the three main different drive types for vehicles on the road today.  First, let’s just spell those out:

With that out of the way, let’s start out with one of the more useful drive types for here in New England, AWD.  All wheel drive means that all 4 wheels of the car are being powered by the engine, generally providing more grip in slippery situations.  Manufacturers known for their prowess in this particular drive type are Audi and Subaru, Audi in particular having really pioneered the movement through their early Quattro rally cars.  The benefits are numerous, more grip in the snow/rain/loose surfaces, extreme dry circumstances and generally even tire wear among others, but you do sacrifice gas mileage as there are more wheels that need to be powered by the engine.  Most would consider vehicles with AWD a great all-around vehicle for those needing one car to do it all through all 4 seasons, however, this drive type isn’t as common as the next one.

Front wheel drive is where the engine only powers the front two wheels.  This is generally considered to the most common type of drivetrain, accounting for a vast majority of vehicles on the road because of its low cost and simplicity, and is found in popular vehicles such as the Toyota Camry, Honda Accord and others.  Front wheel drive vehicles can be more compact, and often have better legroom in the rear as they don’t require any mechanicals in the rear of the vehicle as in RWD or AWD.  Additionally, FWD is much easier to control in inclement conditions as you don’t have to worry about the rear end swinging out every time you touch the throttle  The downsides to FWD are few, but they generally have a greater turning radius as a result of having the driven wheels also do the turning, and they often exhibit what is called torque steer, which means in rapid acceleration the car will pull to the left or the right.  However, manufacturers are constantly coming up with ways to combat this issue and newer, sportier FWD cars are being praised for their handling similar to a RWD sports car.

If you were to take a poll amongst gearheads on which drivetrain they preferred, nine out of ten would probably answer RWD.  The simple, front engine, RWD layout is what those with oil running through their veins consider to be the purest expression of a sports car.  It allows the driver to get a little sideways when desired, and generally helps a vehicle keep close to the perfect 50/50 weight distribution.  This is probably the rarest of drive-trains and often limits the vehicle’s ability to perform well in anything but ideal conditions with anything less than a very experienced driver.  Porsche, BMW, Ferrari, and most sports cars have this layout (among others) and it will probably stay that way for the foreseeable future.  The benefits among those listed above are a higher MPG rating than AWD, lighter weight, and a generally simpler layout because of the two wheel drive instead of four.  However, as much fun as these cars are on a sunny day, when the weather turns they can be a bit tricky to handle as a slightly liberal use of the throttle can result in a spin.  RWD cars are generally found in garages as a second weekend vehicle, but there are those out there that will daily drive them as well (though they are few and far between in states that experience bad weather).  While RWD has traditionally been found in higher-end exotics, manufacturers such as Mazda, Subaru, Honda and Toyota are stepping up and making cheap, fun, and simple cars such as the long-lived Miata and the joint BRZ/FRS project by Subaru/Toyota.  This leaves enthusiasts that aren’t among the 1% to enjoy the thrills of a well-balanced vehicle without emptying their pockets.

While we didn’t cover the 4WD type of drivetrain in this article, it is very similar to AWD in that the number of driven wheels is the same, and the differences are minimal except for the fact that 4WD is generally associated with more off-road oriented vehicles and AWD is usually reserved for cars or light-duty cross-overs.  Whichever one you choose for your next vehicle, be sure to do your research before you decide so that you are happy with your purchase for years to come.